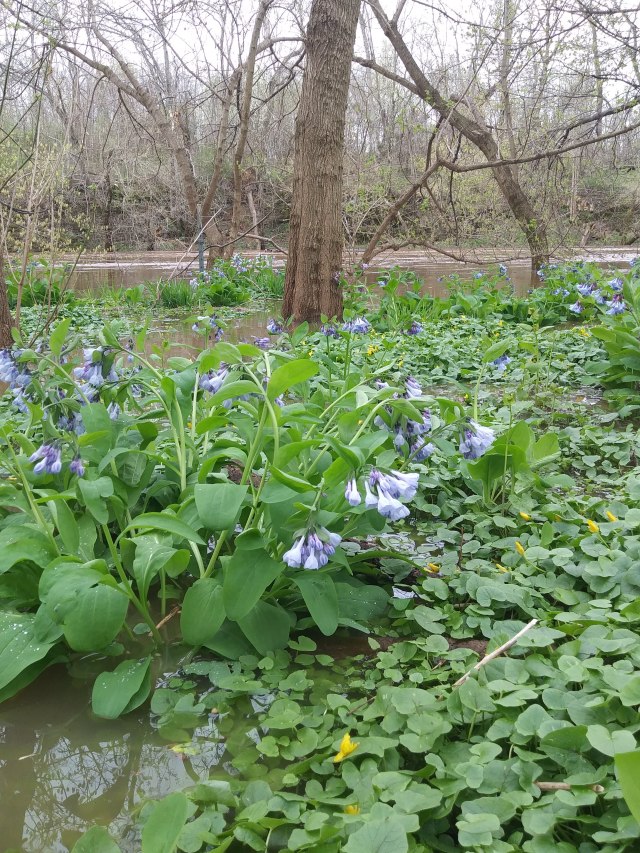 When the Monocacy overflows its banks, my oldest son pulls on his waders, mounts his bike, and speeds to the river, frantic lest he miss a moment of the spectacle, but, as he apparently needs someone with whom to share the wonder (and, amazingly, his active Instagram account doesn’t seem to count), he even more frantically insists that I come along. Secretly grateful to be wanted for something other than a ride to the airport, I follow along, prodded by the intermittent “hurry up!”s made necessary by my bikeless status. Someone, after all, needs to hold the dog’s leash and stash her poop bags, not to mention stop to clean up once in a while.

I haven’t looked at any flood charts, but my son and I reckon that this week the river was the highest it’s been since a stretch of rainy days in March 2014. While the “island” wasn’t  completely underwater, as we have seen in the past, it was shrunken by the swollen waters. The bluebells had become aquatic flowers, and flotillas of logs, branches, leaf debris and trash (I could make out plastic bottles, the distinctive red of a coke can, and the occasional flash of artificial color) drifted by at a frantic pace. A pair of darting swallows and the voice of a nearby kingfisher made me wonder about the other animals, not lucky enough to have wings, whose holes and homes were now underwater.

And I do mean to include those animals with more than two or four feet, like this rather unfortunate spider and possibly doomed caterpillar. Honestly, it’s been a rough spring for the insects and arachnids, in pupal form or otherwise, what with the snow and lingering cold. And now this? Bother.

Not far into our explorations, we encountered a very large snapping turtle that certainly didn’t mind the extra water. My son poked it with a stick (of course), which provoked it into an aggressive hiss, which, in turn, provoked our Rosie-pup into lunging after it in our defense. Knowing that she would lose that battle, I held tight to the leash and suffered her whimpering frustration as the beast disappeared into the muddy depths.

Next week: cleaning it all up.

Mostly this spring seems to have lost its spring, sluggish under the weight of cold weather and snow clouds, reluctant to unfurl for only the occasional glimpse of warm sun.  But as the daylight increases and the earth tilts, there is hope and promise on even the dullest of days.