Sorting through my photographs, I realized that there are several that I set aside for a particular post but then, for whatever reason, never used. Although it conflicts with my need for some sort of focus for all of my writing, in an effort not to completely lose sight of my intentions for these pictures, I’ve decided to set them all out today, with notes, like a disorganized scrapbook page. (I have tried scrapbooking before, and it just isn’t in me; neither is keeping an immaculate house. Truly I am a failure as a homemaker.) But, of course, having written this paragraph, I’ve assigned a theme.  Why do I do that? 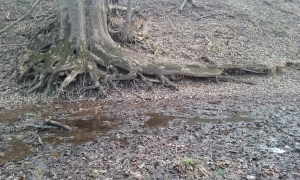 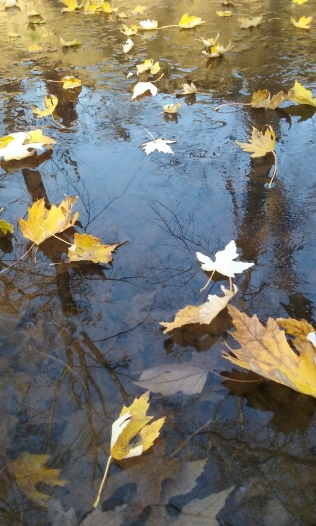 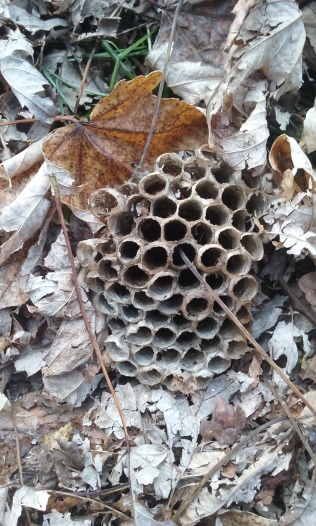 These photographs were to be about line, texture, and symmetry. The old wasp’s nest also reminded me of the huge hornet’s nest that hung inside the ‘Walking Stick’ shrub in my backyard when I was little. I ran right into it during a game of SPUD and suffered the consequences. I never developed a fear of stinging insects, though, perhaps in part because my father took the nest down that winter and allowed my brothers to hang it in their bedroom from the central light fixture. Also, I’m clearly not allergic to them. 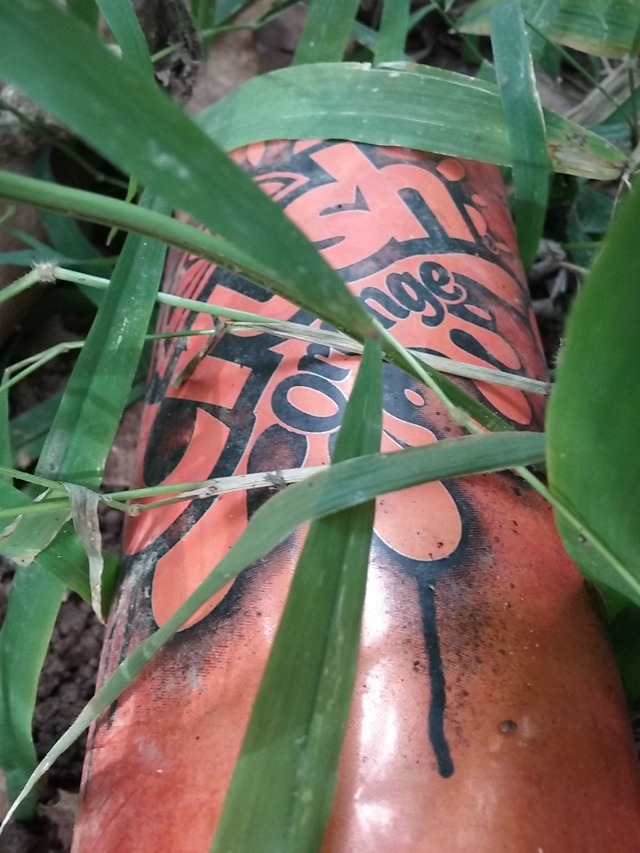 I found this and spent the rest of the day with R.E.M. songs streaming through my brain. 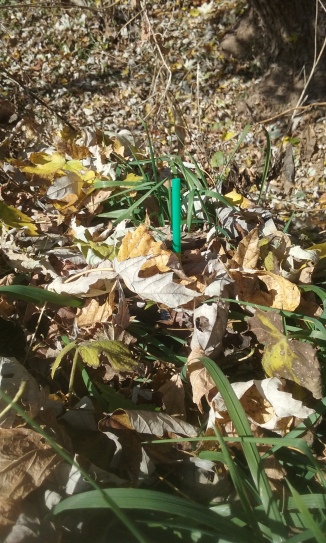 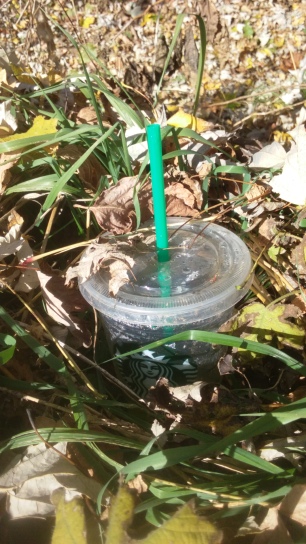 Peek-a-boo trash: before and after. I nearly missed this Starbucks cup when the only thing visible was the green straw. 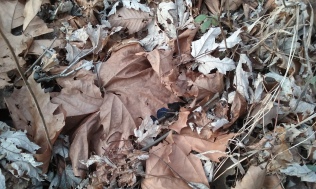 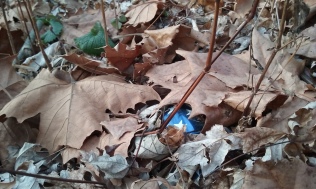 And, of course, I’m still running into the problem, months later, with other sorts of trash. (Yes, Bud Light, again). 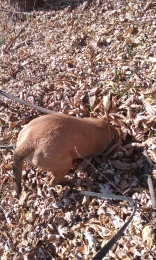 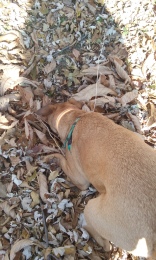 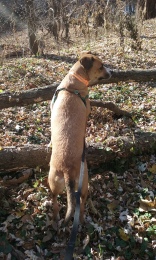 My mixed-breed, young Rosie, is obsessed with sticking her head in holes. (Mostly made by groundhogs, I think). I’m a little afraid that one day she’ll pop back up with a bite on her nose. My friend’s dog once got bit by a squirrel, and the poor thing bled profusely. The dog was fine, but the car never really recovered from the trip to the vet. 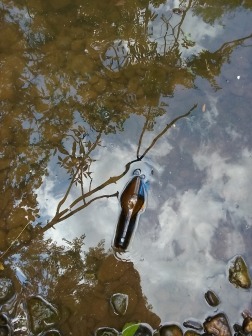 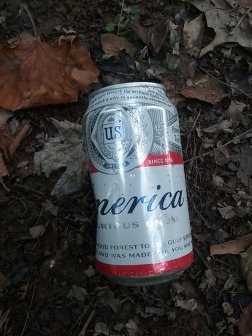 Judging by the trash I gather, Budweiser (and, even more often, Bud Light) is by far the most popular beer consumed along the modest stretch of the Monocacy River that I patrol. The cans are dressed patriotically this summer, the traditional “Budweiser” even sporting the new name “America” through the November election. (You heard about that, right?) The cans even feature the lyrics of “The Star Spangled Banner,” which has special significance in this part of the world, where the author of the lyrics, Francis Scott Key, worked and is buried. (In a curious non sequitor, the local mall and minor league baseball team are named in his honor). Never mind that this all-American beer is now owned by the Belgian company AG Inbev. Free trade, mergers and the vagaries of Capitalism: you can’t get more American than that. 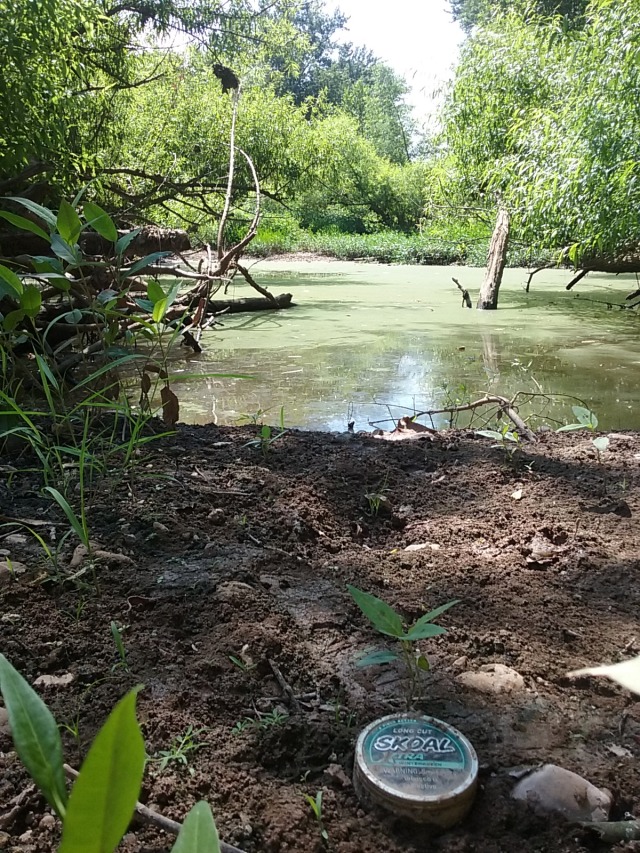 The Monocacy is low enough now that new trash (that is, old trash that is new to me) is revealed every day, and I’ve been able to reach places that were covered in water only a few weeks ago. Rusty cans, broken bottles, fishing line, shoes, and socks: they’re all out there, waiting to be discovered. I haul out up to 3 bags a day, but I’m always leaving something behind. Here’s just a sample of what I find in a day: 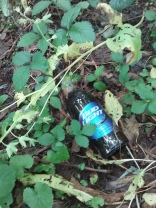 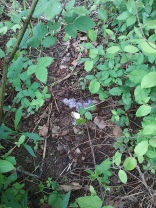 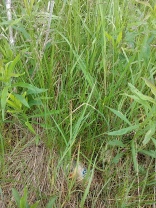 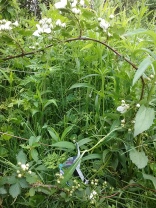 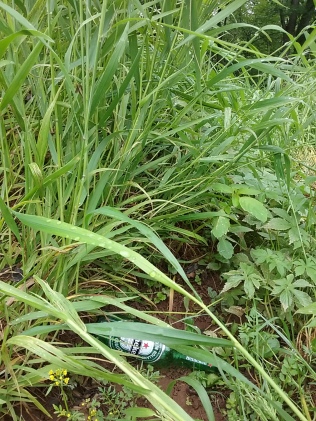 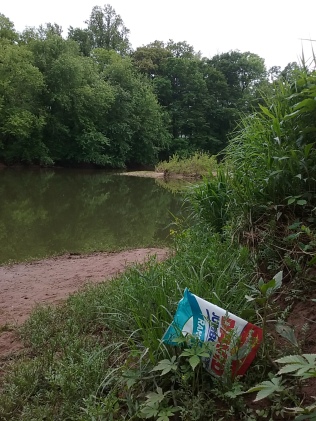 As I mentioned in yesterday’s post, animals can camouflage themselves and render themselves easily missed by my pathetic human eyes, but, as it turns out, so can some trash. A brown plastic bag half-buried in dark earth is barely more visible than a toad amongst leaves, and a faded can of strawberry Fanta covered in long, dead grass hides itself as easily as a moth against the bark of a tree. Other bits of garbage are fortunately more obvious, even if it’s a green Heinekin bottle under long blades of similarly green grass and stinging nettles. I see you, brilliant blue Bud Light label, and you, you bag of ranch-flavored sunflower seeds. (To which I say: is that really necessary?)

I also see the curious looks I get from the more regular trail-walkers when they catch me knee-deep in garlic mustard taking a picture of a beer bottle. With my unkempt hair, old rubber boots, and muddy jeans, I’m certain that I look more bag lady than responsible mother. Once or twice I’ve tucked my phone in my pocket and pretended to be birdwatching just to save my reputation. (Because birdwatchers are such exemplary people? I don’t know.) I guess I should hold my head high and just tell them I’m a trash-collector who writes a blog. I just haven’t gotten there yet.