Even as I type, I can hear the the high-pitched croak of a mother starling scolding my old cat for daring to creep out onto our deck. At 17, our Ashley-cat has lost interest in hunting, and, up until about the age of 15, she never ventured out of doors (or out of our closet, for that matter) anyway. She is a strictly indoor cat by choice, and, considering her longevity, it’s hard to argue that this hasn’t been a good decision on her part. While I can’t blame the starling for vociferously protecting her babies (which are, yet again, in our chimney vent), she’s wasting energy that she could be using to fetch her children food, which they seem to need about every 5 minutes judging by the desperate racket in my living room wall.

Even if Ashley-cat had been inclined to go outdoors, we would have kept her inside. The many cats that we kept when I was growing up had full roaming privileges, going out or in as they pleased, with multiple door-openers at their service. One cat in particular, a big, blond boy with a kingly mien, preferred the outdoors and seemed to feel that he belonged to the whole neighborhood rather than simply to us. (For reasons unknown to me, as I was not yet born when he came into our home, we called him Tiffany, which made me endlessly confused about all the girls named Tiffany…I knew three of them and was convinced that all of their parents had made a mistake.) His roaming ended when he was hit by a car on the busy street in front of our house.

Upset, I did what every distraught 10-year-old girl does and wrote a letter to the editor in my local paper. In the letter (which I signed with my name and age), I chided careless drivers and requested that, if they must hit cats in the road, they stop, take the cat out of the road, and inform a local homeowner. This was all very naive, of course, and I soon received several nasty letters in the mail informing me that I was an irresponsible pet owner who was to blame for my cat’s death because I had let him outside. This enlightening experience led me to two big resolutions (in addition to self-loathing): first, I would never write a letter to the editor again, and, second, when I had my own cats, I would keep them inside.

Earlier this year, I finally broke the first resolution in order to write a letter to the editor in support of a polystyrene ban in the state of Maryland. (Kind of a no-brainer for this blogger). No one really trolls by snail-mail anymore, but I did make a point not to read any online comments.  The second resolution I became even more affirmed in when I read a book by my teenage idol, Margaret Atwood, in which she warned against the dangers of allowing cats out to hunt and kill songbirds and other native wildlife. Nonetheless, I have confess, I ultimately broke it with my older cat, Olaf, who was an escape artist and knew how to take advantage of the carelessness of two young boys and the distraction of their mother. I still miss that cat, but it was his thyroid and kidneys that compelled us to let him go, not the wheel of a car, and, despite his greatness as a mouser, he never caught anything with feathers.

I used to worry about Ashley-cat’s fearfulness. She was surrendered to the Animal Humane Society in Golden Valley, Minnesota twice before the age of four months, when my husband and I adopted her shortly after our wedding and move out to the midwest. To seem as small as possible, she tucked herself into the back of her cage at the shelter and, at home, spent most of her time under beds, behind couches and, finally, in closets. Even now, when she ventures out, it is to stay on the deck, a man-made surface within view of the door. If I start to shut it, she comes running with wild eyes and slips back inside. She is truly a house-cat. And she plans on never, ever, ever even knowing that there’s a river nearby.

I climbed through the pile of debris, a great mass of limbless logs, sticks, mud, and leaves driven together in a recent flood, in order to grab the Frappuccino bottle for my trash bag. It was only at the last moment, as I replaced my phone in the back pocket of my jeans, that I noticed the snake. It was still, watching me closely, apparently convinced (and rightly so) that it hadn’t yet been seen. Not wanting to startle it, I made a show of noisily stepping back and around to pick up the bottle from the other side, and it took the opportunity to slither under a branch, deeper into the jumbled mound.

As I continued picking my way around the river, I stepped a little more carefully, as much to avoid falling through camouflaged holes as to avoid stepping on an unassuming reptile, and I encountered more trash than I had in many weeks. This isn’t altogether uncommon after a stretch of rainy weather, which both prevents me from my work and drives more trash into the rising waters of the Monocacy as it rushes downstream. I was actually grateful to find an empty cement bucket to carry the excess garbage from my three overfilled plastic bags.

Later, as I shifted the bucket and bags to my left hand to reach for a cigarette wrapper caught in the upper branch of a fallen tree, my thoughts rambled in their disjointed way from beer cans to plants, soda bottles, and snakes, and I realized that my trash-collection was yielding a veritable garden of vices. But, as I thought of these vices — drinking, smoking, gambling — I decided, no, I won’t call these vices — that term expresses a degree of moral judgment that I don’t feel — but addictions. They’re there, these addictions, all of them, their evidence littering the river, whether chemical (beer cans, cigar wrappers, and soda bottles/alcohol, nicotine, and caffeine) or habitual (lotto cards, styrofoam, and plastic bags/gambling, technology, and food). 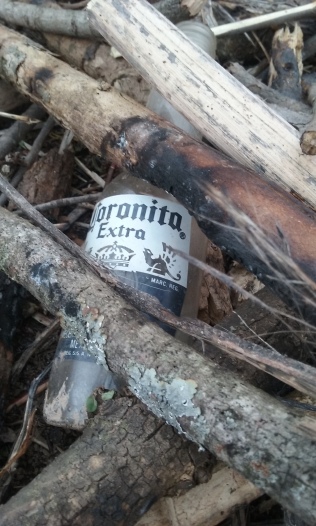 Nationally and locally, addiction is a major topic of concern. Abuse of opioids, and fentanyl in particular, has become an epidemic, reaching crisis levels in Frederick County, where, according to the Frederick News-Post, “despite the increasing prevalence of overdose-reversal drugs, opioid overdoses and deaths both nearly tripled in 2016 compared to 2015” and “another 43 overdoses — four of them fatal — were reported by the end of the first two months of 2017” (April 27, 2017). In February, a pedestrian not far from “my” island on the Monocacy found a body washed up along one of its banks.  An April 13, 2017 article in the Frederick-News-Post reported that, while the young man, Matthew Thomas Delash, died from drowning and hyopthermia, “intoxication from fentanyl and N-ethylpentylone were also complicating factors.” His family wrote an honest, heartfelt obituary for him, expressing the pain and power of addiction as they sought to acknowledge the true person, a generous son and a friend, behind it. When I first heard about this man’s death, I wasn’t sure whether to include it in this, my loose account of life on the Monocacy River. He and his life were not trash, and it is a hard thing that he was lost in the waters of such a beautifully ugly place as this urban river can be. But to ignore his death is even more of an impossibility. He, like the rest of us who live along its winding banks, is a part of the river and its story.

Warning: I am about to write something completely off-topic.

A few days ago, the local paper ran a front-page story about the sudden death of a 30-year-old former local high school football star. No, let me correct that: it wrote about anything but the death of a 30-year-old former local high school football star. I would be positive and say that it wrote about his life, but that would also be untrue. The lengthy story concentrated only on what an amazing, focused athlete he was as a teenager; how he was so good and so serious that his friends didn’t like to involve him in pick-up games; how he gave up every other sport for football; how he had the world at his feet and colleges banging down his door; how he casually and confidently chose to go to the University of Maryland…until he injured his spinal column at the end of his freshman year, transferred to Penn State, never played again, and “life did not get easier.” After this statement, the writer returns to extolling the young man’s athleticism in high school for several more paragraphs, before dropping this quote from one of his old high school buddies: “We haven’t really hung out much or talked to him much…There wasn’t much in common here lately. We didn’t really want to associate with him, unfortunately.”

The cause of this young man’s death is never mentioned, and so I cannot with certainty say why he died. But there are dark hints that lead to some sad possibilities. He had a bad football injury, most certainly painful, and was never able to play football again. Afterwards, his “life did not get easier.” His friends ceased hanging out with him and “didn’t really want to associate with him.” He died suddenly of a cause not reported. When I read between these lines, I see hints toward depression, personality change (think: concussions), and, very likely, addiction. I also see a lost opportunity for a real story.

I understand that, for the sake of his family and friends, relating the (apparent) grimness of his recent years and the (painful? sad? tragic?) details of his death is something that, as a sympathetic writer, you might be reluctant to do. You want to remember the good times. But, to put his death on the front page and and to devote almost 30 paragraphs solely to his years as an amazing high school football player seems entirely disrespectful of the majority of his life. Was he truly only valued for those 2 or 3 years of athletic greatness? Did he fall off the face of the earth after football? The article notes that his Facebook page mentions working for a local tree service and country club. Did he have no friends from these places to quote? What has he been doing for the last 10 years? Was it of no value? Was he of no value?

It’s strange how angry this article has left me…for him, his family, his loved ones, for all those injured athletes who have had to face life after their sport.  All of these men and women are more than what they can do on a field, or how fast they can run, or how hard they can kick. Let’s be respectful of that. Let’s remember that. Let’s remind them of that.

We are not to be defined by one ability, by one time in our life, by one tragedy that changed things. We are all so much more.