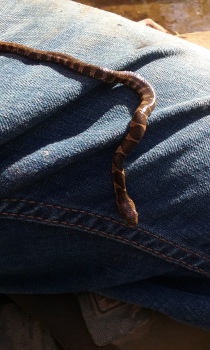 If you see a snake in the Monocacy River, don’t panic, because whatever your mean-spirited friends may have told you, it’s not a water moccasin.  We really don’t have those in Maryland.  Instead, it’s most likely a harmless, though sometimes ill-tempered, Northern Water Snake.

Yesterday, while moving large rocks from one place to another (because it’s what they do), my boys found a baby Northern Water Snake at the edge of the water. It was rather unfortunate for the poor snake, who had to endure being moved in and out of the water repeatedly so that they could watch him swim sinuously against the current. He was a docile infant, gazing at us patiently as water dripped from his smooth head, and posing on the rocks, in the river, and on my son’s jeans, until the boys finally let him go.

My younger son had a more unfortunate encounter with an adult Northern Water Snake a few years ago, as we played in the deep waters of the main river. It was a hot July day, when the sun and humidity were intense enough to make swimming in the polluted water tempting for the boys. I remained on the shore, likely daydreaming as much as overseeing their play, when one of them called out excitedly, “A snake!  A snake!” Immediately they agreed to pursue it as it swam toward the opposite bank.  “Leave the poor thing alone!” I commanded repeatedly, honestly more afraid for the snake’s welfare than my sons’ safety, although I did add, “You’ll get bit!”  “Grab it! Grab it!” my older son insisted, as he waded noisily through the water, his excitement (and, yes, general disposition) rendering him deaf to my warnings.  Just as my younger son began to say, “Got it!” he uttered a cry of pain and turned to me with wide eyes, holding out his bare, wet arm. A trickle of blood flowed from four perfect fang marks on his wrist.  Swallowing my I-told-you-so’s, I reassured him that everything would be okay, that he wasn’t going to die, that we would clean his wound, and that we would look up the snake on the internet so that he could see that it wasn’t poisonous.

Fortunately, I’m not terribly afraid of snakes, particularly in Maryland, where only two are venomous, the Northern Copperhead and the Timber Rattlesnake.  When I was hiking in the Catoctin Mountains as a teenager, I almost stepped on a Copperhead, but I haven’t seen one since, and the Timber Rattlesnake is so uncommon that it’s on a watchlist. I was raised encouraged to be unafraid.  One of my brothers, at least, would have teased me unmercifully for being squeamish, and even I thought it was funny when, on one of our camping trips, my dad had to remove a snake from a woman’s bathroom to stop a lady from crying.  (We begged to take the snake home, but he said that it was against the law). Besides, snakes didn’t always inspire such fear; in the past, they were even good omens, such as in Minoan Crete, where snake goddesses were worshipped as chthonic deities, or in Classical and Hellenistic Greece, when snakes were a part of healing at the temples of Asklepios.

Of course, there are snakes that one should fear and avoid, but not here on the banks of the Monocacy River.