On my walk to the river this morning, I stepped off of the main path in order to avoid meeting anyone; it was an altogether unnecessary move. Yesterday eight inches of wet, heavy snow fell, which closed the schools and brought all sorts of revelers and shovelers outdoors, but last night the temperatures plunged and winds whipped up, which is always enough to drive people back indoors in this part of the world. As I walked, my boots barely broke through the surface of the snow, which had frozen overnight, and the only other tracks I encountered were those of the deer who had bounded off a few minutes before.

The sun was a weak light through flurry-bearing clouds, more of January than March. A week ago, I was taking pictures of Virginia spring-beauties, celandine, and bluebells, but today the most notable flora was wind-blown grass lying flattened across a dune of snow. 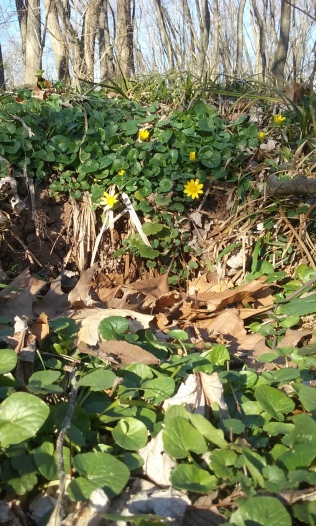 For me, there is beauty in both views.

The warmer weather that has been hounding us most of the winter surpassed itself over the long weekend, bursting into a series of summery days that resulted in a) lots of human activity and b) lots of human trash. My elbows are still recovering from the weight of the garbage bags that I had to carry home, and I have far more recyclables than my 2 bins and bi-weekly collection schedule can manage. While I usually take a sort of housekeeperly pleasure in cleaning around the river, weekends like these are overwhelming. It’s frustrating to have to leave things behind (such as a stash of cans squirrelled beneath a log) simply because I don’t have enough bags to hold it. That’s when I remember that this is a job that is never finished. Like laundry. (Actually, I found some of that, too). 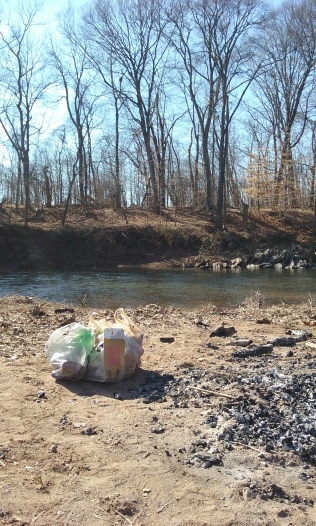 Two days of collecting were particularly intensive. On the first of these, the boys and I encountered a fire circle with one log still so smoking hot that it took little more than a dry leaf to reset it aflame.

After we hauled the log farther into the water, I set about gathering a case’s worth of beer cans, a six-pack of bottles, and other such picnicky miscellany. I couldn’t help but see the irony in having to clean up yet more Budweiser “America” beer cans, which have splashed across them the lyrics of “This Land Is Your Land,” by Woody Guthrie, a song that highlights the natural beauties of the United States. (For the song’s history, see the concise NPR story http://www.npr.org/2000/07/03/1076186/this-land-is-your-land). Yes, indeed, this land is for you and me. I wish that we could all remember that. And behave that way.

On the second day, I found an entire campsite’s worth of garbage. Literally. A tent had fallen down an eroded bank into the water below, along with a slew of cans and food wrappers, mostly submerged in mud and impossible to extricate. As I filled up all three of the bags I had brought and two more bags that I found, I was grateful for the broken, soft-sided cooler, which served as an excellent trash receptacle after I dumped the muck that had accumulated inside of it. To reach the makeshift site, I had to ford the river twice, which, since my five-foot frame was so weighed down, required that I carry everything back in shifts. 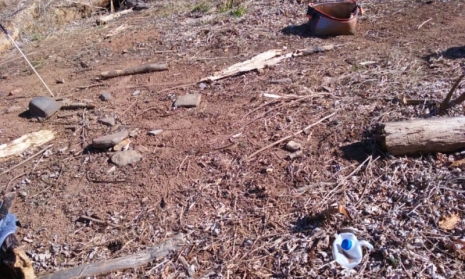 All of this activity managed to startle a fox, who zipped past me in all of his sly regalness. He wasn’t twenty feet away, but my hands were too full to grab my camera. Perhaps it was the campsite that had attracted him in the first place. It’s hard to tell. But he didn’t appear drunk, and there was very little but alcohol left to consume. I, unfortunately, stank with beer that dribbled from the cans as I collected them, and I’m pretty sure that the odor, combined with my bag-lady appearance, is what earned me a few nervous stares from families with small children on my way home. 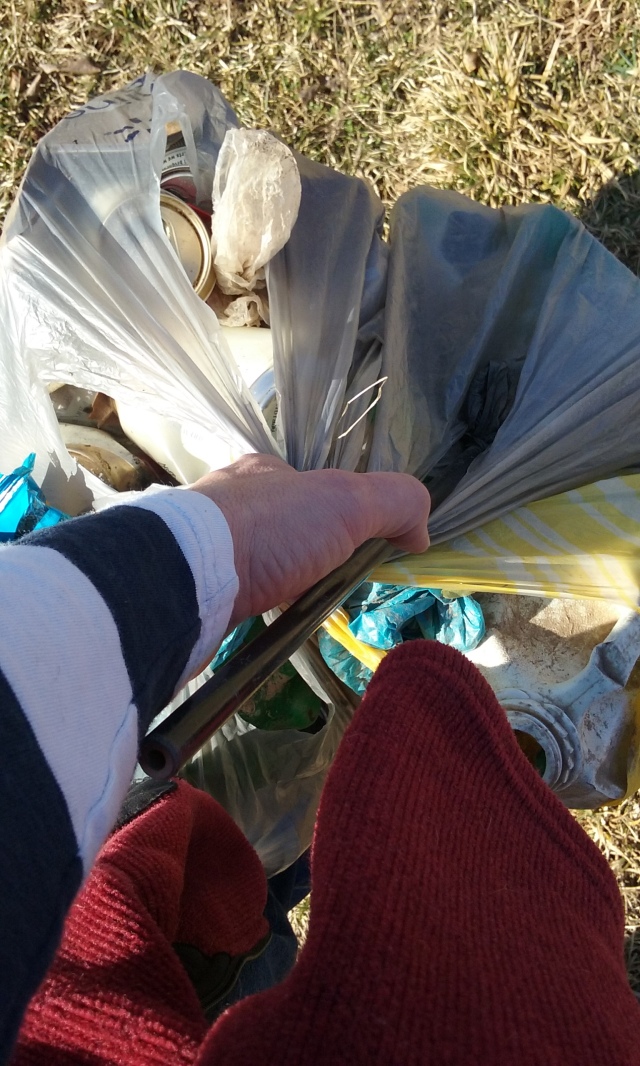