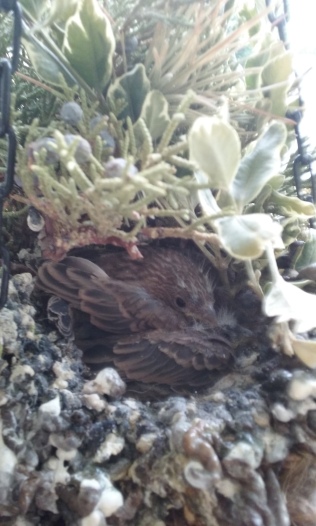 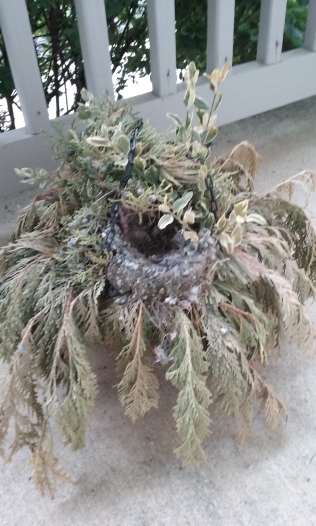 The house finches have left the nest.  Three days ago, the first fledgling boldly made its move, and by yesterday all four of them had abandoned their poop-ringed home.  Just to be sure, I left the arrangements up for one day, but now I have happily dumped their contents into the trash.  It’s time for a little color on the front porch.

May has brought a few other changes as well.  The starlings I rather hoped had gone have built their own nest in a vent on the outside of the chimney.  Being that there’s no trace of it to be found anywhere, it’s not clear how the vent cover was removed, but I wouldn’t put it past the clever immigrants to have figured it out themselves. When I’m in the living room, I can hear them through the walls, and when I’m turning the corner to the east side of the house, I see them flutter out of their hole.  While we’ve bought a replacement for the vent, my husband and I haven’t the heart to shut the nestlings in, however plentiful and messy starlings are.

The rabbits, too, are multiplying and nonchalantly chewing up lawns and gardens.  It’s the time of year when I can count more then ten of them on a simple turn around the block.  My younger pup is hyperaware of the situation, popping up her ears and lunging against her harness around nearly every corner and shrub.  The rabbits munch beneath the bird feeders in our yard as well, which really drives her mad.  Utter the word “bunny” in her presence, and she tilts her head, leaps to her toes and makes a dash for the back door.  Despite the fact that the door leads to our second-story deck, which provides plenty of notice for most hapless prey animals, our huntress managed to catch a rabbit last year. She was very confused when we didn’t look utterly thrilled and, in her grave disappointment, has resigned herself simply to chasing them out of the yard.

Last night’s storms were wonderful for my garden but flooded the river enough to make it inaccessible for trash-collecting. I guess it’s my day off.