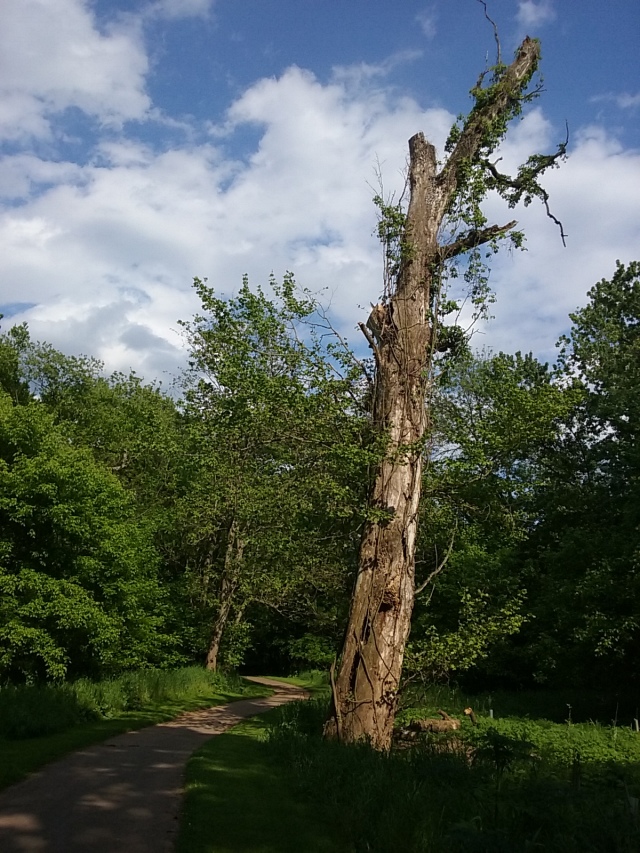 My son has a word for long-dead trees that still stand in the woods: the Standing Dead. The smaller ones he enjoys pushing over, both to test out his muscles and to hear the great crack and groan as they tip and finally fall to the ground. After an ice storm a few years ago, we ventured to the river and found ourselves in dangerous territory. All around us, we heard branches creaking, snapping, and crashing, and the accompanying whump and snap and kersplash as they landed in the forest and the river echoed through the chill, moist air. One such branch missed us by only a few feet. The boys, being heedless daredevils wont to cheer enthusiastically during lightning storms (especially on airplanes) and tornado warnings (which are too few in Maryland, according to them), thought that the whole thing was magnificent, and I had a hard time convincing them that it might be a good idea to go home.

Despite the floods and ice and wind storms that take out these Standing Dead (which, by the way, actually go by the scientific term “snags”), there are still plenty of them along the river.  They are important to the insects, birds and other small animals that use their cavities, dead wood, and solid structure as homes and food sources. Only yesterday, I spied a pileated woodpecker knocking on a snag for insects, and it is always fascinating to peel away the loose bark to find grubs, ants and beetles busily making lives for themselves underneath their surface.

Since explaining to my son the importance of keeping the Standing Dead standing, I have convinced him to leave them alone for the most part.  The large ones, at least, he can’t move anyway, which is fortunate because, whether festooned in vines during the summer, or bent and angled sharply against the sky in winter, these dead trees are really beautiful in their own way.