Last week’s rains filled the Monocacy to its banks, which prevented exploration for a few days, but as the water receded to more average levels, we were treated to another sort of fun: mud. Lots and lots of it. The kind that sucks off your boots and ends up in your hair. While the boys modeled it into facades that seemed to lead into the riverbanks (and which reminded us of something out of Tolkien, like the Mines of Moria, but for muskrats), I discovered a veritable treasure-trove of tracks and footprints. 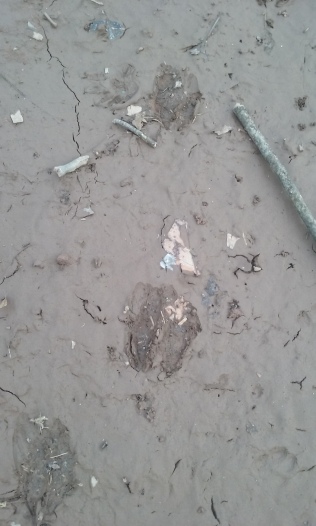 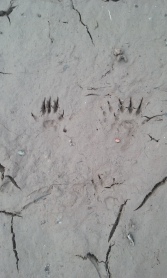 They reveal the life along the river that I rarely see; the creatures that come out when I’m not there. Honestly, evidence of the white-tailed deer is everywhere, in the form of scat that my younger dog takes too much pleasure in rolling herself in (and then pouts for days over the subsequent bath), and the squirrels are rarely too shy to show themselves, either. Raccoons, however, are more secretive (being nocturnal), and herons, although visible, prefer not to let me get too close. The Monocacy is host to other animals as well: opossums (one of which made it into my house), shrews, moles, voles, mice, chipmunks, groundhogs (whose holes are another obsession for my younger dog), weasels, minks, and otters, just to name a few mammals. We’re there, too, of course, sometimes leaving a little more than footprints

At least yesterday I found a piece of trash that I could use to collect the other pieces of trash. That’s always helpful. If you look on the bright side.

18 thoughts on “Beyond Mud Pies”

Will cooperate for sun.
I had a visitor today.
Scenes from the Orkneys: cows, rocks, sheep, water and a few people.
Highlands with the boys. #travelingwithteenagers #ardvreckcastle #bettyhillbeach
Pretty much how my old girl Poppy always looks at me these days.
Our Poppy girl is 16 years old today! #labradorretriever #olddogsrule